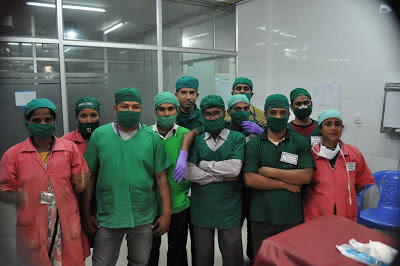 Hospital Tour and Supply Set up

St. Damien’s is the only pediatric hospital in Haiti and going from the chaos and disarray outside through the gate is profound.  We were met by Sister Judy and given a tour of these beautiful grounds and facility so we could see everything – there is a large ER, an OR and even a neonatal ICU here – these are overly full with lots of children, some of whom are weak and very ill, others who are on the mend and will do just fine.

The team worked together to unpack supplies and match them to where they would be used.  We reviewed our surgery list and readied the team to screen kids in the morning to begin surgery on Sunday.  George, the chief of logistics in charge of making sure the medical teams can do their jobs well, spoke with Sister Judy to get updates as to how many kids we might expect on this mission. We will see at least 30 children to determine who will be taken in for surgery.

St. Damien’s happens to be directly next to where the UN has set up camp and we see the large operation as we headed off the grounds to go to the grocery store – it was filled with dozens of UN soldiers from Brazil, Nepal, Italy and Jordan so we squeezed our way through the aisles for our supplies and returned back to the hospital grounds.  There is a lot of multiculturalism in Haiti now – we hear the calls for prayer from the Jordanian camp several times on our first day.  We’re also told that they start at 4:30 AM – that could end up being some kind of wakeup given our long flight to Port Au Prince.

Our first day ended with us having an amazing chicken dinner at Mama Rafael’s, on the hospital grounds, and then hitting the showers – they are cold but felt very good.

Posted in Haiti | No Comments