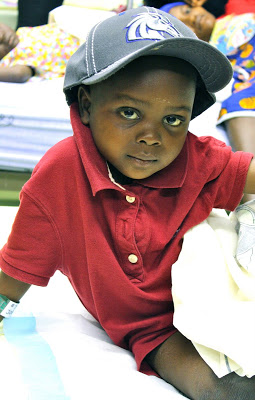 We left the Guest House at 6:30 am sharp in order to have the first patient on the operating table at 7:30 am. The first three patients (17 total today) were a proximal hypospadias, a huge umbilical hernia and a cleft lip. Dr. Lawrence Sherman of the Duside hospital participated in the cleft as Dr. Lander of our team is teaching him, step by step, how to complete these surgeries on his own. Dr. Lander was thrilled that Dr. Sherman was able to do much of two surgeries on his own with oral guidance.

The patients had been staying at the hospital overnight and hadn’t had anything to eat or drink since midnight last night. The staff and volunteers at the hospital have been extremely helpful. In particular, we want to give a round of applause to one volunteer who has returned from last year, a Physician’s Assistant student at Liberia’s biggest hospital, Mr. T.K. Abonoko Wiah. He has prepared IV’s, taken parents to the waiting area, comforted crying children and been invaluable as a translator.

We began handing out the beautiful hand sewn gift bags that have been so beautifully prepared by Benjamin Poore for his Eagle Scout project. Every girl patient receives a hand made doll from Dollies Making a Difference (a Pacific Palisades organization which reached out to CSI after reading an article about us in their local paper) and each boy receives a baseball hat courtesy of Zephyr Hat. School supplies, toothbrushes/paste, a school notebook, shampoo, soap and washcloth are also included in the gift bag.

One of the patients is a 13 year old boy named Menmeah who had an accident several years ago—his mother said he had fallen from the top of a tree through the branches to the ground. Ever since the accident, the boy has been having such difficulty urinating that he had to drop out of school and has been unable to attend for the past 4 years. He leaks constantly and walks with a rag between his legs. Because the boy’s father is handicapped the older 3 children receive school for free, but Menmeah is unable to attend. Dr. Dave Vandersteen operated on the boy this afternoon and pulled out a 3 inch stick that was lodged up inside him, now covered with calcification. When the doctor showed the stick to the mother after the surgery was complete, she burst into tears. Prior to surgery Menmeah was proudly showing the staff in pre-op (Katie Houle, Jan Martland and CSI Partner Katie Stewart) how he could write his name. He will be very happy to return to school, his mother says.

Tomorrow is another very full day with 23 surgeries. A few of the team members will be visiting an AIDS orphanage, and then traveling with Debbie from Orpha Relief and Rescue (orphanreliefandrescue.org) We’ll be preparing a meal, delivering clothing (one mother in Minnesota gave us all the baby clothes her twin daughters have outgrown).

Shown above is Dr. Lander briefing Dr. Sherman the Liberian physician performs his first cleft, two boys out of surgery sporting their hats donated by Zephyr Hat Company, and children with dolls from Dollies Making a Difference. 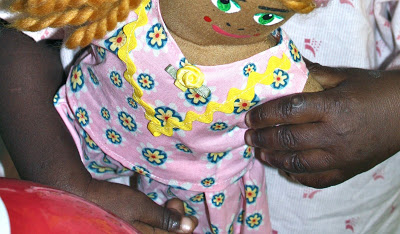 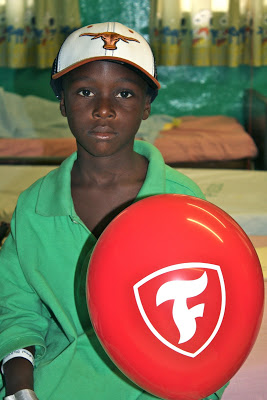 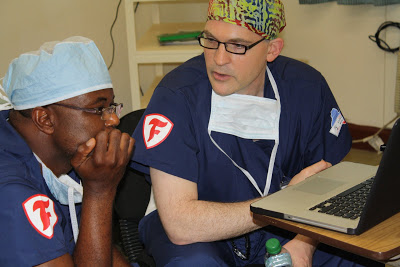