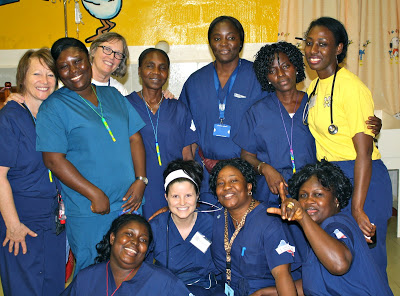 Bags were packed and left for wonderful George Pezzimenti of Firestone who has done an A+ job of keeping us safe, sound and on time, with a can-do attitude that is a joy to be around. An extra hour or two to sleep this morning guaranteed smiles on all our faces.

Let me describe the scene as physicians came to make final rounds on the ward before the Farewell Program and lunch with hospital staff. All the children who had received surgery were in varying states of packing to leave, or eating breakfast, or slowly waking up. Their mothers or grandmothers or fathers were sitting at the foot of their beds. When the doctors arrived, one mother started singing in her bold a cappela, a well-known Liberian hymn of thankful praise. Within ten seconds every parent, who two days ago was unknown to every other parent, united in a groundswell of a hand-clapping hallelujah tune they’d all learned at their own parent’s knee or in some simple hall of worship. They were united in having children who have suffered, and now have benefitted from CSI’s presence at Duside Hospital.

As everyone who is a parent knows, most mothers and fathers would rather bear their children’s own suffering than have to watch them grimace while trying to urinate for years, be mocked for having a “split lip”, or have to wear a loose loin cloth instead of pants because of a huge hernia. They were certainly going to let everyone know about it with their booming voices all singing the same song in unison! There is something so pure and glorious about how the women here show joy, whether it how they laugh at a child’s funny gestures, or celebrate having their name drawn at our Farewell Raffle for staff. As they sang, the clapping became louder, hips were swaying, nurses were all in, and every child was grinning from ear to ear. It was a sight those who were there will never forget, and the sort of simple spontaneous show of emotion that makes countries like Liberia such a joy to visit. Being part of a CSI mission allows us to jet propel ourselves into the most private corners of the lives of our patients and their mothers/aunts/grandmothers/fathers/grandfathers/friends or nobody’s who have accompanied them to the hospital. What an unparalleled privilege.

The Farewell Ceremony included thoughtful closing words by Dr. Lander highlighting the transfer of skills that has taken place on this mission. A surprise presentation of a ceremonial robe to Lora Koppel for all of her contributions to the children of Liberia touched her immensely…” This is the highest honor of my entire professional nursing career,” she noted. A highlight for many was the presentation of the inaugural Mission Volunteer plaque, which went to Mr. Jackson, a hospital custodian, who worked tirelessly throughout the mission making spaces, and faces better wherever he went.

On all counts, the mission was a success. Everyone boarded the bus relatively healthy, and each bearing a beautiful oil painting of Liberian scenery, given by Wadei Powell and her Firestone/Duside team. The partnership, between CSI, Duside Hospital, and especially because of Firestone, allows our Liberian missions to line up exactly with CSI’s objectives. 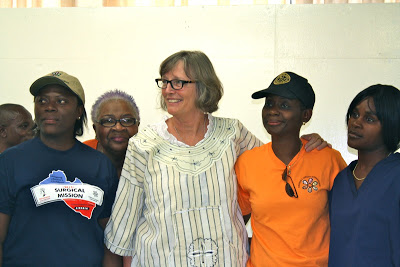 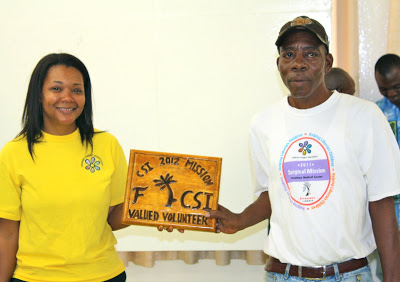 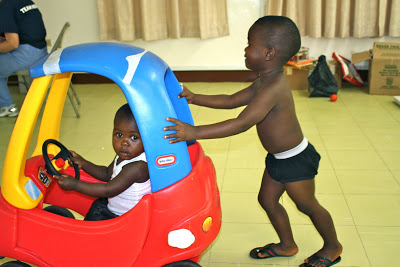