Arrived safely at Robertson airport last evening, and got to the Firestone Guest House safely, all accounted for, and all luggage in hand! Congratulations to our logistics team member this year, Joel Johnson, as well as all of the Firestone supervisory personnel dispatched by Dan Adomitis of Bridgestone Firestone and his team. We were met by wonderful Lillian, all of the Firestone staff, and many familiar faces as this is our third year back. In bed relatively early for everyone, and day one spent touring the capital of Liberia– Monrovia. We stopped at a museum, a marketplace, the first church of Liberia where the repatriated slaves worshiped after the Emancipation Proclamation gave them the option of being returned to their home continent of Africa, saw the US Embassy as well as the new UN building. The day also gave us a good chance to have a rest day as we hear tomorrow, screening ,will be very busy. A stop at the beach on the way home to see where the Atlantic Ocean meets the western coast of Africa, and back to the Guest House for an orientation talk by Dan Adomitis and our first team meeting led by Medical Team Lead Dr. Tim Lander. Shown in the pictures a photo displayed in the museum of what the streets of Liberia looked like following the Civil War, which ended in 2004; the streets literally littered with bullet casings. Also is a reflection in a new building in Liberia as well as a busy street corner in Monrovia 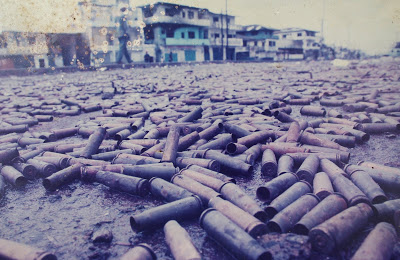 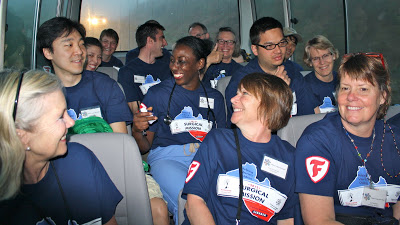